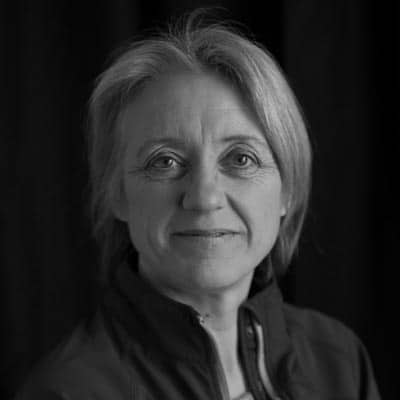 Ann Daniels is a world record holder and leader of teams in the most extreme environments on earth. Starting out as a mother of young triplets and without any outdoor experience, pure hard work and and belief led her to being selected from over 200 more experienced women to take part in her first North Pole expedition. A relay consisting of five teams of four women with two guides and where she learnt her survival skills and fell in love with the natural world and the challenges expedition life brings.

From these humble beginnings she went on to conquer the South Pole and in 2002, together with Caroline Hamilton and Pom Oliver, she sledge hauled from land to the North Pole and became the first woman in history to ski to the North and South Poles as part of all women teams. A record that still stands. Experiencing temperatures as low as -50C and dealing with various encounters with Polar bears, she has sledge-hauled over 3000 miles, in the most inhospitable environments in the world, completing many expeditions and surviving over 400 days on the ice.

She was pathfinder and head of ice operations for the prestigious Catlin Arctic Surveys. Three major Polar expeditions, using manual drills to measure the thickness of the Arctic sea ice, dropping sensors into the water and collecting samples to help scientists, working on Ocean Acidification and the Thermahaline problems facing all our Oceans.

Her latest achievements have seen her working with NASA, the European Space Agency and many other high profile scientific establishments to help discover the effect climate change is having on our fragile world.

Her achievements have been recognised by many bodies including the Guinness book of records, The Pride of Britain Awards, The Foreign Office and the Women of the Year Awards. She has appeared on t.v. and radio and gives presentations on leadership, teamwork, motivation and environmental issues, tailoring every speech to her audience bringing out the key elements that are important to the event.