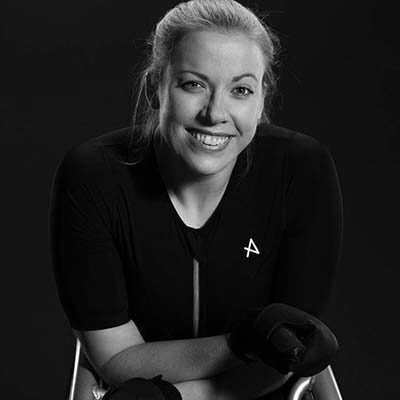 Hannah Cockroft MBE DL is a British wheelchair racer and TV presenter. Current holder of the 100, 200, 400, 800 and 1500 metre world records in the T34 classification and 100, 200, 400 and 800 metres Paralympic records, Hannah rose to prominence in athletics at the London 2012 Paralympic Games, in which she won two gold medals. Since then Hannah’s career has seen her win three further Paralympic gold medals, alongside twelve World Championship golds, making her the most successful British athlete in athletics World Championship history in both the able- bodied and Paralympic teams. Her sporting success has resulted in her appointment as a Member of the Order of the British Empire and Deputy Lieutenant of West Yorkshire, also being awarded the Freedom of the Borough of Calderdale in 2012. After a successful 2017 season, she was the first Paralympic athlete ever to be named ‘British Sportswoman of the year’ in its 58-year history. Hannah presented a regular feature on BBC Countryfile at the beginning of 2019 and has appeared on shows such as The Great British Bake off, Sport relief does Strictly Come Dancing, Crystal Maze and Mastermind. Hannah is a keen supporter and patron of several charities including The Jane Tomlinson Appeal, Whizz Kidz and Forget Me Not Children’s Hospice and is also ambassador of the Danny Jones Defibrillator fund, EUREKA! Children’s museum and The Piece Hall in her home town of Halifax. She is currently training towards the postponed 2020 Paralympic Games to be held in Tokyo.