THE RUGBY HERO, THE TEEN WITH CANCER AND A BOND THAT LEFT A LIFESAVING LEGACY:

When former England rugby captain Lewis Moody met Joss Rowley-Stark, a teenage fan with a rare cancer, he didn’t expect his own life to be changed. ‘In early 2012, I received a letter from Joss’s stepdad Graeme to ask if I could do something to cheer Joss up during his chemotherapy treatment,’ says Lewis, 41. As a high-profile sportsman, Lewis regularly received similar requests. ‘But this was a handwritten letter that really touched my heart,’ he says. 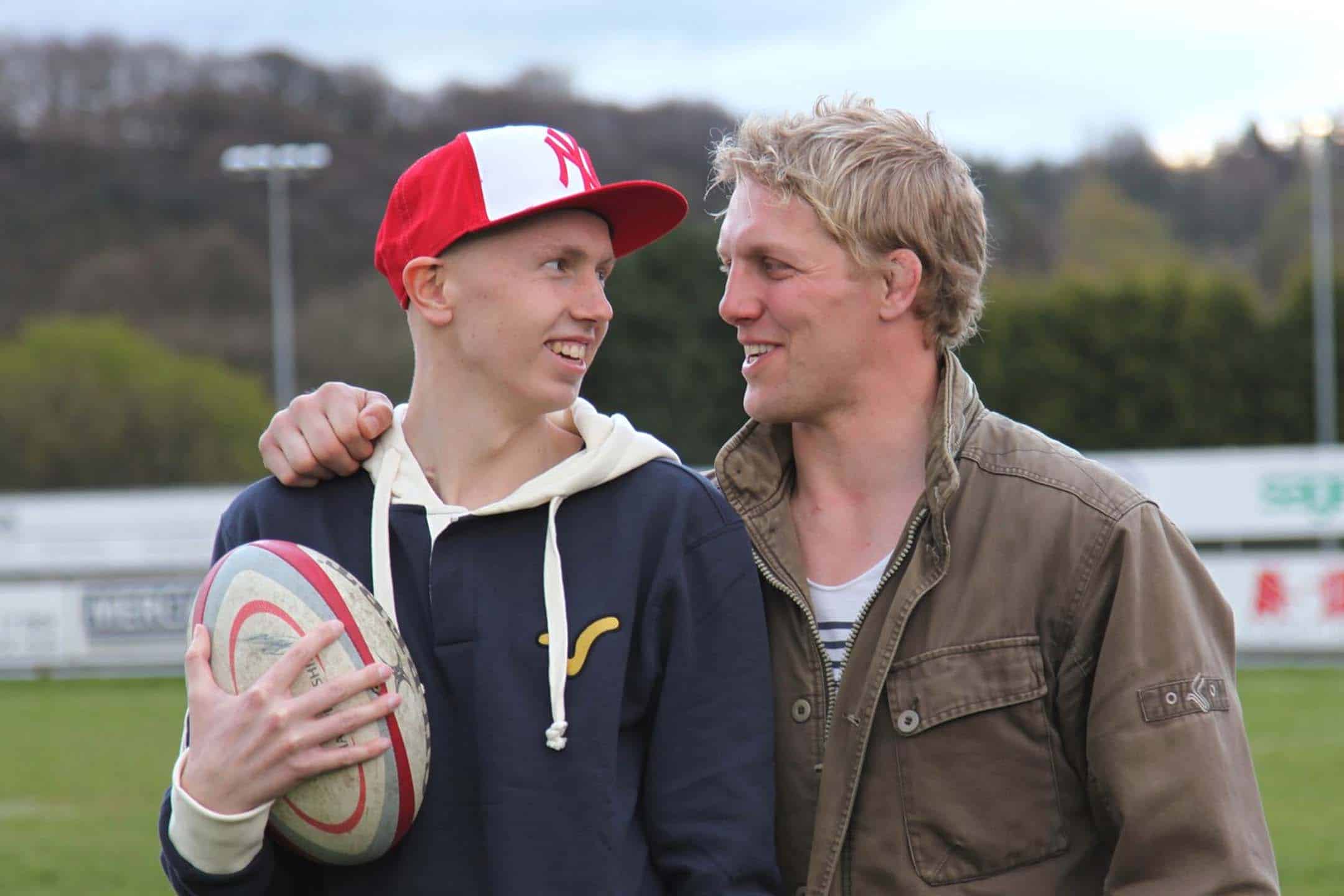 It also came at a difficult point in his own life: Lewis, England’s most- capped flanker, had recently been forced to call time on his glittering career because of injury.

‘I’d been forced to retire at 32 due to a shoulder injury that meant I’d never play rugby again and I was completely lost,’ he says. ‘I had no idea what I’d do next.

‘I called Graeme and we arranged to meet in Sheffield,’ he adds. ‘I felt drawn in immediately. Joss and Graeme met me at the station; Joss was wearing a cap because he’d lost all his hair from chemotherapy, yet he was chilled and cheerful.

‘As we spoke, I realised how special he was. All his concerns were for his [rugby] team, his younger brother Leo and his parents. I just knew this was a really special kid.’

Even though Joss, 15, was facing his own immense challenges — he’d just finished four rounds of gruelling chemo and radiotherapy — when Lewis met him, he wanted nothing for himself. 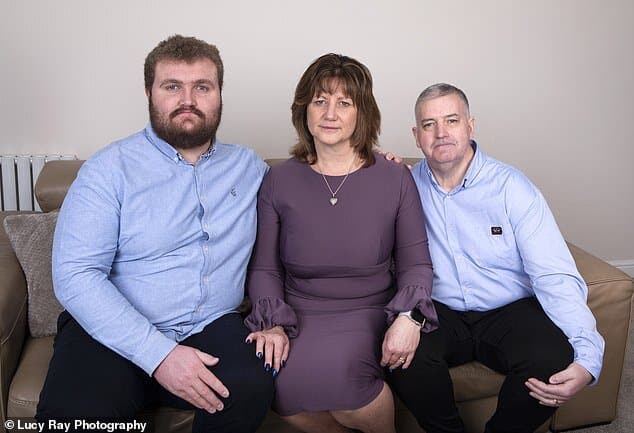 Instead, he asked Lewis if he would meet his teammates and lead a training session for his own rugby club, Sheffield Abbeydale. He’d played two seasons but was now too ill to take part.

‘It was such a kind and selfless request and so steeped in sportsmanship, it grabbed my heart,’ says Lewis.

‘I didn’t know how things were going to go for Joss but we kept in touch and messaged each other frequently, sharing our passion for rugby, which was really cool.’ Yet, just over a year after they first met, Lewis received a call to tell him Joss had passed away. ‘I knew he was very ill but I was shattered by the news,’ he says. ‘It was after we attended Joss’s funeral that [my wife] Annie and I formed a charity for children with cancer.’
Since its inception in 2013, The Lewis Moody Foundation has raised £1.2 million for families affected by brain tumours, with the latest fundraising expedition setting forth for the South Pole this week.

Joss’s mum Tiffany is emphatic that Lewis will never know how much he did for the family. ‘He boosted Joss’s morale at a time when we were spending three or four days a week in hospital,’ she says.

But Lewis says the impact Joss had on him was ‘more than I can ever convey’.

‘Joss helped me find a purpose which I had lost,’ he says, simply. ‘The charity — and my future — was 100 per cent inspired by Joss, who fought cancer with courage and selflessness,’ says Lewis.

Joss, an academic ‘all-rounder’, had been playing in a rugby match in September 2011 when, aged 14, he felt pain in his hip.

‘Joss was 6ft 4in and a fantastic sprinter,’ says Graeme, who runs a car sales business. ‘He ran the length of the field, put the try down, then ran back to me and said, ‘Dad I think I’ve pulled something.’ I thought his hip muscles might be the problem so I took him to a chiropractor but massage didn’t help.

‘He insisted on playing the following weekend even though his hip was still painful. Knowing what we know now, we wonder how much pain he’d been in and for how long, because he never moaned about anything.’

After the match, Joss started to complain of aches all over and a general feeling of tiredness. Tiffany and Graeme took him to their GP three times but ‘they couldn’t find anything wrong’, says Tiffany, 50. 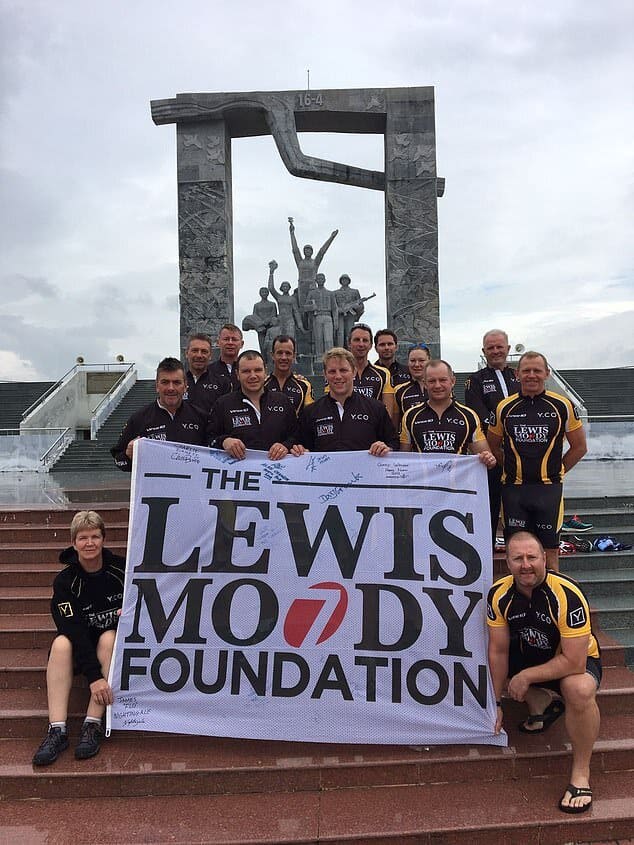 In January 2012, noticing he was losing weight, they took Joss back to the GP. A blood test showed Joss had a high level of calcium; and a chest X-ray revealed lesions in his lungs. ‘The doctor said these signs could indicate a chest infection or cancer and advised us to take him to hospital for more tests,’ says Graeme.

Joss had a series of tests, including a full body scan. Tiffany says: ‘The following morning, January 24, 2012, Graeme, Joss and I were shown into a small room where we were told Joss had alveolar rhabdomyosarcoma, a rare cancer that grows in the muscles.’

The high level of calcium in Joss’s blood was an indication of cancer; and the lesions on his lungs were where the cancer had spread.

‘You think you won’t be able to cope but the only thing on my mind at that moment was staying strong for Joss,’ says Tiffany.

‘I knew if I looked frightened, he’d be frightened. When he looked at me for my reaction, I said: ‘Joss, we’re going to be strong, and we are going to beat it.’ He never cried and his positivity didn’t waver.’

The scans showed the tumour was behind Joss’s pelvis and had weakened the bone. The hip pain Joss had complained of was actually a fractured pelvis, caused by the cancer. 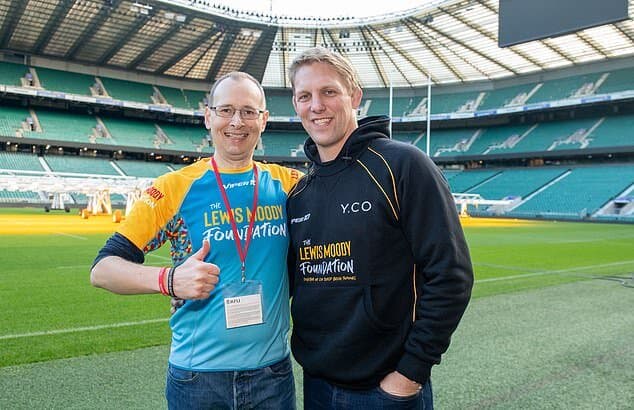 ‘The oncologist explained the cancer was stage 4 — meaning it was quite advanced and had spread,’ says Tiffany. ‘We were told just 6 per cent of children beat it but Graeme said, ‘If you lined up 100 children, you’d pick Joss out as the fittest,’ and this kept us strong. Deep down, I really believed it; you have to.’

Tiffany didn’t go back to her job in insurance but stayed by Joss’s side while over the next 12 months he had 19 rounds of chemotherapy and 54 sessions of radiotherapy.

‘Despite the sickness and losing his hair, Joss never complained,’ says Graeme. ‘He saw every treatment as a step towards recovery.’

But despite the intense treatment, Joss’s cancer progressed quickly. ‘It was in his jaw and his spine and he was in a lot of pain,’ says Tiffany.

‘Even so, he was determined to go to school when he could. He even wanted to take part in a charity football match — of course he couldn’t. But that’s the kind of kid he was. He was so determined and so strong.’

Joss had an amazing effect on everyone he met. ‘Everybody loved him,’ says Tiffany, her voice breaking. ‘At one of the final appointments with the oncologist, she broke down as she explained we had run out of options and told us, ‘I’m so sorry, I can’t save him.’ ‘

Lewis, who kept in touch with Joss, didn’t realise how ill he was. ‘About a year after we first met, Graeme called, clearly a bit down,’ Lewis says.

He breaks off several times during our conversation to compose himself. ‘It always makes me very emotional talking about it,’ says Lewis. ‘My boys, Ethan and Dylan, were five and three at the time, and I couldn’t imagine what agony Joss’s parents were going through.

‘After the match, we had dinner with the players. That was when it hit me Joss wasn’t going to make it. When we’d first met, apart from hair loss from chemotherapy, he looked like a fit young boy.

‘But when I saw him a year on, his appearance had changed drastically and he was wheelchair-bound.’

Over the next two weeks, as Joss became weaker, Tiffany and Graeme looked after him at home. He passed away on April 22, 2013, just after his 16th birthday, having lost his sight and the ability to speak and move. ‘Towards the end, I remember saying, ‘Listen to your body, Joss, you don’t have to keep fighting. Go to sleep . . .’, says Tiffany. ‘And despite his extraordinary will to live, he died peacefully.

‘Cancer was an evil that entered our lives, turned them upside down and took our beautiful boy.’

Two weeks after their day at Twickenham, Graeme called again to tell Lewis the terrible news. ‘I don’t talk about this often because when I do I get very upset,’ says Lewis. ‘But it reminds me why we work so hard to raise money for cancer research.’

Indeed, Lewis and Annie were determined to keep Joss’s memory alive by helping other children battling cancer. ‘We set about trying to understand which charity needed the most support,’ Lewis says.

‘We researched it and realised that brain tumours are the biggest killer of children in the UK — yet receive the least funding. This has meant treatment hasn’t changed for decades and we wanted to do something about that.’

The Lewis Moody Foundation works in partnership with The Brain Tumour Charity. By inspiring people to take on huge physical challenges — ‘like the mountains children with cancer face daily’— Lewis’s charity has raised more than £1.2 million to date.

One of its biggest achievements is HeadSmart, a campaign which has reduced the diagnosis time for children from more than nine weeks (in 2011) to six-and-a-half weeks today.

The aim is to reduce this to less than four weeks in line with NHS guidelines. Lewis’s latest fundraising challenge, Headsouth, which began on January 3, takes Lewis and his team of ten, led by polar explorer Alan Chambers, 111 km across the Antarctic plateau to the South Pole.

The temperature will drop to -35c and the team guide, former Marine Wayne Hoyle, expects severe wind chill and storms. This is the final stage in a series of fundraisers called HeadsUp, which saw Lewis raise £300,000 for his charity.

The aim of the Headsouth challenge is to raise £250,000 for The Tessa Jowell BRAIN-MATRIX, a study inspired by the much-loved MP who died from brain cancer in 2018. It is open to patients with grade 2, 3 or 4 glioma (a form of brain cancer) and will enable doctors to treat them with targeted drugs.

The Headsouth team doctor, Harley Street dentist Neil Counihan, will be striking out with the names of young cancer patients written on the front of his skis.

‘If they can endure the treatment, I can endure the cold,’ he says. Dr Counihan’s cousin Rob, ‘a handsome, super-fit successful businessman’, was diagnosed with a grade 3 glioma last year at the age of 40. ‘After surgery to remove as much tumour as possible, his only treatment now is to ‘watch and wait’,’ says Dr Counihan. ‘We are hoping that new, targeted drugs that harness the body’s own killer cells will be available in the UK in time to help him.

‘Currently, UK survival rates for brain cancer patients are the worst in the Western world — and that has to change.’

Colin Watts, a professor of neurosurgery at the University of Birmingham, says: ‘More than 11,700 people are diagnosed each year with a brain tumour, including 500 children and young people. Brain cancer accounts for the highest average years of life lost to any cancer, which is partly due a poorly developed research infrastructure.

‘This is why The Brain Tumour Charity funds world-leading research to accelerate a cure.’

Joss’s family have also taken part in the charity fundraisers: In 2018, when Joss would have been 21, Tiffany and Graeme set up Joss’s 21st Birthday Challenge, which raised £21,000 for The Lewis Moody Foundation through 21 fundraising events, from simple coffee mornings to a skydive.

For Tiffany, Lewis’s charity work is both a loving tribute and a dazzling testimony. ‘I’m so proud of Joss and the sweet, caring child he was, and of Lewis and Annie for everything they do,’ says Tiffany. ‘All this has happened because Joss met Lewis and captured his heart.’